What stage is your WIP in? I’m completing another major swipe of Dead Locked. This should be (will be!) the last round where any major changes occur. I don’t know what it is about this particular go around, but I swear it won’t end. I work and work and work and at the end look to see how much I have left and it’s always the same answer: a LOT! Sheesh! I keep telling myself it’s downhill from here. After this, it’s smaller changes and more focus on the details. We’re almost done! I keep saying I’m taking a break when this is finished. I’m going on a mental vacation and not writing! But it’s a lie. I have two other novels well under way and they won’t leave me alone! 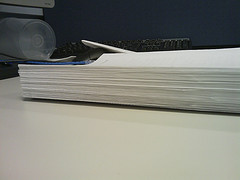 As a little reminder of why we write and what makes the pain and suffering all worthwhile, I thought I’d share another snippet from my book. This is one of my favorite scenes and hopefully you’ll like it too. Enjoy!
***

Imogen Bell waited for Sebastian at his house, planning to attack him with good looks and charm. She propped open her pink cosmetic case on the toilet seat since he only had a pedestal sink, and examined her options for the evening. About the time she was sliding brown tinted mascara onto her eyelashes to accentuate her cat eyes, the outside screen door slammed.
He didn’t bother to find her out, which meant he was opposing her silently. She smirked at her reflection, her apple cheeks now glowing pink. The imperfections around her heart-shaped face smoothed over, she latched her cosmetic case and unzipped the garment bag slung over the bathroom door. Sebastian didn’t even have a hook to hang anything on.

Imogen waited a few minutes until she heard the fridge door shut, then slunk into the living room, her body wrapped in a strapless black dress ruched around the bust then curving down to her calves. She walked by Sebastian casually, who munched on chips in front of the TV, relishing his brown eyes following her across the room. She took her time leaning over to pick out a beverage from the fridge, letting him absorb all the benefits of suffering in a tux for a few hours. She smiled to herself, remembering the way Caroline Ferrars had studied her earlier, and she had to admit having more than just an impressive mind didn’t hurt.

She walked back around and carefully sat down next to him on the olive green couch. She opened a water bottle, holding it away from her and took a sip.

“It’s all yours,” she said, pointing to the bedroom. Sebastian’s eyes flitted over her figure. Imogen imagined him calculating what spending an evening with her in that dress was worth. He stuffed another chip in his mouth and chewed slowly.

“What do I get in return for doing this?”

“You’re bargaining with me?” She said.

Imogen looked up at the ceiling and shrugged.

“That’s all I was asking for tonight.”

“Good point. Sounds like a deal to me. Now go get ready before it gets any later.”

Sebastian vanished behind the bedroom door. He reappeared a short time later, and Imogen appraised his long, lean figure against the doorway, hands dug into his pants pockets. Everything about Sebastian was long and lean. From his nose and jawline to his palms and fingers. He was sinew and muscle and little else.

“For all your insistence that this is a waste of time,” Imogen said, “you’ve cleaned up nice.”

She noted that he’d even made an effort to tame his almost-black hair by gelling it back away from his face. She thought she actually preferred it the other way. He walked forward, the heels on his square toe dress shoes clicking against the wood floor, with a pen and two yellow legal-size papers in his hand. He set them on the coffee table.

“Our bargain. I go tonight, the next event that comes up I don’t have to go to. Pretty basic. I already signed.”

“There are two copies to sign there so we each have one.”

“Well,” she said as she signed, “I’ll be sure to put this in my security box first thing on Monday.”

Imogen stuffed the contract into her black satin clutch and balanced against the wall to squeeze her feet into a pair of pointy-toed black heels. Sebastian folded himself into Imogen’s yellow VW Bug after she protested that her chin-length red hair, now perfectly flipped out at the edges, would be destroyed if they rode in his Jeep. In about ten minutes, and several laughing fits later, they pulled into the yacht club parking lot and Sebastian surrendered the keys to the valet. The sun was low over the harbor, its reflection rippling over the water’s surface. Imogen admired the calm for a moment, still giggling, then walked through the glass door, Sebastian on her heels.